Daniel Burnham created the “Master Plan of Chicago” which originally envisioned five piers. Eventually, only one 1.5 mile long recreational pier with freight and passenger ship docking facilities was commissioned to be built near the mouth of the Chicago River. Now 2010, let the Navy Pier architecture derby begin. First out of the gate: Helmut Jahn. The German-American, Chicago-based architect has a bold vision for redeveloping the pier, which couldn’t be more timely in light of Wednesday’s announcement that the lakefront icon will get a major overhaul by its 100th anniversary in 2016. 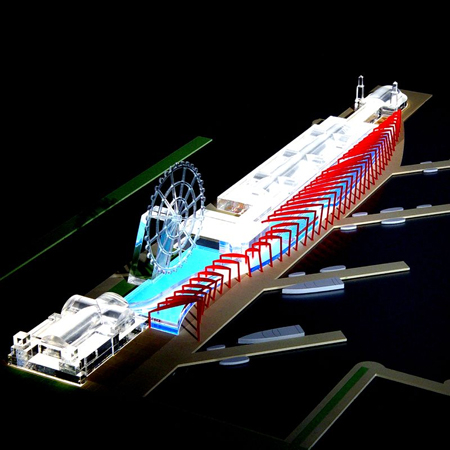 The plan, which Jahn showed privately to pier executives in 2008, addresses several of the pier’s nagging problems: its hodgepodge of historic and contemporary buildings; its mazelike . An enormous curving canopy, made of red steel arches and topped with a taut fabric roof, that would be bracketed by the classically-inspired buildings at the pier’s head and foot. The canopy would join the pier’s disparate structures into a single, overarching image, comparable to a sail or a wave.

Yes, it’s over the top and, in all likelihood, ridiculously expensive. But it’s full of creative sparks — precisely what was missing from the largely predictable list of recommendations made by a visiting panel of developers in conjunction with the news about the pier’s revamp.